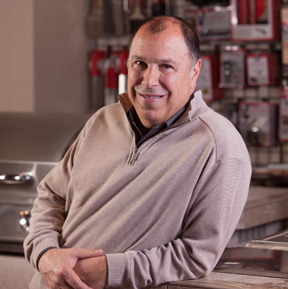 Bull Outdoor Products, based in Rialto, California, is a leader in the manufacture of prefabricated outdoor kitchen appliances and equipment, providing products to 900 dealers and distributors in North America as well as in the UK, numerous European countries, Philippines, Costa Rica, and Panama.

“Mark championed and popularized the concept of outdoor kitchens with his development of sophisticated barbecue equipment and accessories,” said Jack Goldman, President & CEO of HPBA. “In doing so, it helped to widen the barbecue market, which other manufacturers have since followed.”

Nureddine launched his career in the spa industry where he gained valuable insights into the concept of outdoor living. His exploration led him to believe that homeowners would embrace broadened outdoor cooking experiences as well as equipment that exceeded the standard barbecue grill of the day. In 1993, he and his former business partner founded Bull Outdoor Products. Since then, Bull Outdoor has grown into an international corporation with its development and manufacture of an extensive inventory of innovative grills, islands, and accessories that are fully assembled and delivered to the consumer.

Nureddine and his wife, Barbara, also established the “Grill for Good” fund in 2014 in support of “For A Reason,” which coordinates a long-term effort to accompany Haitian students on their educational journey. More than simply providing tuition, “For a Reason” builds relationships with students and their families, for the duration of a student’s education–from elementary school to university. “The personal support and financial commitment that Mark and his wife are making into the lives of children is outstanding,” said Goldman.

The Donna H. Myers Barbecue Leadership Award will be presented on March 8th in Nashville, Tennessee, during the Big Green Egg Cook-off at HPBExpo 2018. Now in its seventh year, the award, sponsored by HPBA and Casual Living magazine, recognizes innovative leaders who have contributed to the growth of their companies and the overall industry. Recipients combine distinguished professional achievement and community service with problem solving skills and an unwavering commitment to the barbecue industry. Donna H. Myers was a leading barbecue industry advocate who died in January 2011.

Previous winners include: Dante Cantal, gas appliance innovator and founder of Twin Eagles, Inc., (2017), Stan Hays, champion pitmaster and co-founder and CEO of Operation BBQ Relief (2016), Ron LaRocca, 30-year marketing and sales veteran instrumental in growing the barbecue industry (2015), Ed Fisher, Founder and Chairman of Big Green Egg (2014) and George A. Stephen, founder of Weber-Stephen Products and creator of the Weber Kettle Grill (2013). The first award, in 2012, was given posthumously to Myers.