Infrastructure solutions firm HNTB, who serves as architect and engineer-of-record for this iconic project that began a decade ago when the old bridge built in 1932, was deemed unsafe to withstand a major seismic event. From winning the City’s design competition to bringing the project to completion, HNTB, the Bureau of Engineering and the citizens of LA have something to celebrate. 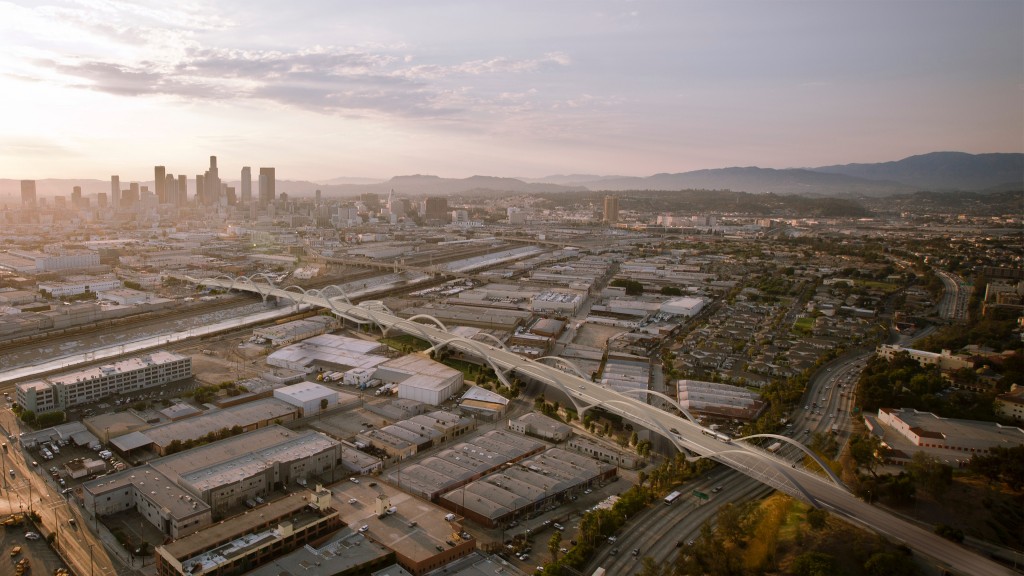 The Sixth Street Viaduct (also known as the Sixth Street Bridge) is a 3,500-foot bridge in Los Angeles that connects historic Boyle Heights on the east side with the Downtown Arts District on the west. The bridge spans the LA River and the 101 Freeway, local surface roads as well as 18 railroad tracks operated by five different railroad agencies including Union Pacific and Metrolink. The earlier viaduct on this site, built in 1932, was closed for demolition in January 2016.

The new Sixth Street Viaduct was designed by the HNTB-led team that won an international design competition decided by public vote. The viaduct accommodates vehicles and pedestrians, as did the original, and provides dedicated lanes for bikes.

A new 12-acre public park running below the bridge, accessible by multiple stairways and a monumental helical bike ramp, will provide access to much-needed recreational fields with restrooms and café, the LA River, public art, and a programmed arts plaza. The new bridge will become a destination in Los Angeles as much as a thoroughfare.

The new viaduct, a tied arch bridge referred to as the “Ribbon of Light,” pays homage in its design to the 1932 bridge, which had two pairs of iconic arches over the LA River section of the structure and appeared in countless films, television shows, music videos, and commercials. The new bridge employs a series of 10 pairs of sculptural arches with the tallest pairs placed adjacent to and framing the LA River where the original arches stood and another taller pair span US101 as a gateway on the east. The canted arches, which allow the bridge to embrace its deck and open to the sky above, recall the iconic beauty of the original bridge and create a new cinematic choreography through sequential views framing the city for travelers moving along the bridge. The new viaduct is the largest bridge project in the history of Los Angeles, with a cost of $588 million.