Steve Jobs, the late CEO of Apple Inc, told the city of Cupertino in June of 2011 that his company is “growing like a weed,” and that he and his architecture team came up with a plan to construct a round, all-glass “spaceship” headquarters building that could hold upwards of 12,000 employees.

Well after more than two years of studying the plans, the Cupertino City Council has finally given the estimated $5 billion project the green light. The council on October 15 voted unanimously in favor of the Apple Campus 2 project.

Located in Cupertino, on 175 acres previously occupied by Hewlett-Packard 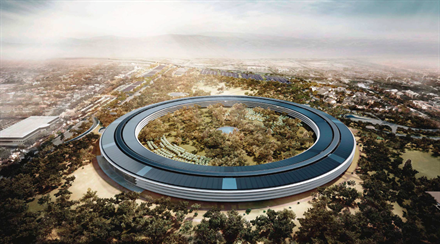 Company, the project will demolish more than two dozen existing structures and replace them with a single 2.8 million sq-ft round spaceship-like building wrapped in glass. The project was designed by international architecture firm, Foster + Partners, headed by Norman Foster, and is being built by a joint venture of DPR Construction and Skanska USA Building.

This was welcome news to Apple CEO Tim Cook, who shortly after hearing it, tweeted: “Our home for innovation and creativity for decades to come. Cupertino City Council Gives Unanimous Approval for Apple’s New Campus.”

The relatively short, four-story Main Building is orientated to minimize the visual impact on nearby residential neighborhoods. Amenities of Campus 2 include a restaurant within the Main Building; a separate, 100,000-sq-ft fitness center; a 1,000-seat, 120,000-sq-ft auditorium; and 10,980 parking spaces spread between a below-grade structure and a surface lot.

The Campus will also feature a Central Plant Building that is integrated with the parking structure, as well as 600,000 sq-ft of office and research facilities accommodating up to 2,200 employees, to be built as part of the project’s Phase 2, which is scheduled to start after the Phase 1 Main Building is complete in 2016.

One of Jobs’ wishes for the new campus was that it take the existing site, which was about 80 % asphalt and hardscapes and turn it into a green haven, with 80 % greenscape, highlighted by hundreds of trees and plants, park areas and meadows.

Jobs, who grew up in the area and died in 2011, told the City Council in 2011 that this particular plot of land was special to him because it once belonged to Hewlitt-Packard, and that Mr. Hewlitt himself gave the young Jobs a job at age 13.

According to Apple’s September 2013 Project Description, a primary objective of the development is to create an “innovative and beautiful campus near Apple’s Infinite Loop facility that consolidates Apple’s personnel in a single distinctive office, research and development building…in a secure landscape is to promote shared creativity and collaboration, and spur invention of the next several generations of Apple products.”

The “net-zero” project will boast a climate-responsive design, a comprehensivemulti-modal transportation plan, and a compact land use that reduces building and parking footprints and the heat island effect. It vegetation is designed after the natural California landscape, replete with native and drought-tolerant plants.

Greg Aragon is a freelance writer from Los Angeles, who writes about construction around the Golden State, from San Diego to San Francisco

Shortly after the approval of Apple’s new corporate headquarters in Cupertino, never-before-seen images have emerged to reveal a glimpse into the campus’ massive, 2.8 million square foot “mothership” and its surrounding facilities.

Provided by the City of Cupertino and released by Wired, the images depict just what Steve Job’s hoped for: a world-class, state-of-the-art office campus that promotes innovation through vibrant communal spaces and healthy employee amenities. From the net-positive main building to a private, subterranean auditorium placed within a forested, California-native landscape by OLIN, the Foster + Partners-designed Apple Campus 2 has the potential to be, as Job’s believed, “the best office building in the world.”

Read on to view a collection of the newly released renderings…

Framing a lush courtyard space on the Northern portion of the 176-acre campus lies the site’s centerpiece: a circular monolith, a.k.a the “Main Building” or “Mothership”, which will provide high performance office, research and development space to 12,000 employees. Though many images have been published of the Main Building’s exterior, these are the first to reveal just what one might expect when entering the structure’s four-story interior. 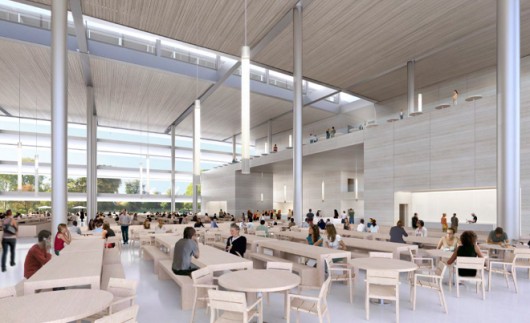 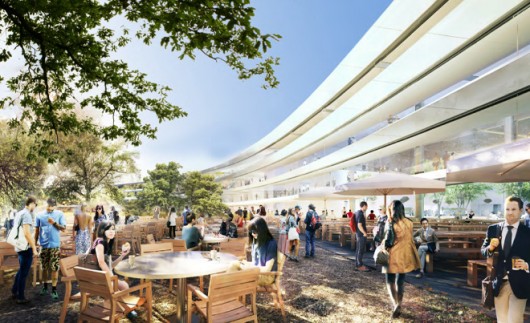 While photovoltaic arrays cover the Main Building’s top, a large underground parking garage will form its base. Hidden from view, the 2,000-space lot will be accessed by a roadway submerged beneath the forest.

Additional parking will be provided by an above-ground garage on the campus’ southern edge. Though not completely hidden from view, its camouflage greenwalls will help it blend in with the surrounding nature. Bike lanes and shuttles will be provided to move people throughout the site.

Those arriving by bus, will be greeted by a state-of-the-art Corporate Transit Center complete with two white, grandiose staircases ushering them to the Main Building.

Accessed only by a gravel pathway leading through an open grassy field, the private, subterranean Corporate Auditorium will be reserved for special presentations and events. Upon arrival, visitors will be welcomed into a glass encased entry room, topped with a flat, circular roof, before being lead below ground to a 1,000-seat theater and event space.

A quaint Visitors Entrance facility and Visitors Center will embody a similar language as the Corporate Auditorium, and most Apple stores for that matter. Though shaped differently, according to its own unique program, both will feature expansive glass walls and all-white finishes. 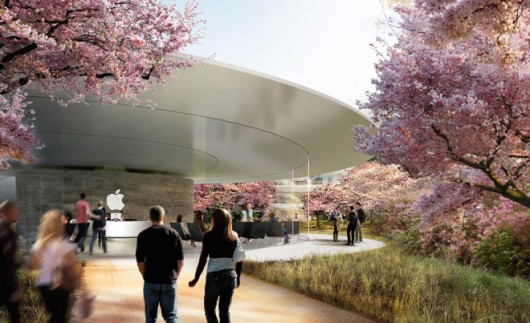 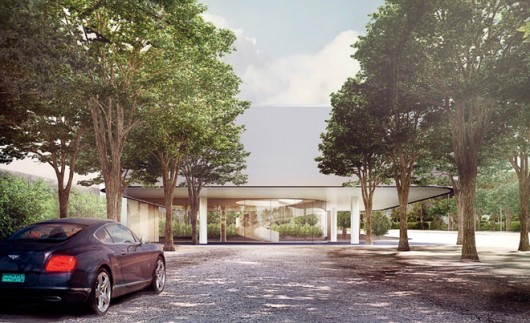 To keep employees healthy and happy, the modern campus wouldn’t be complete without an all inclusive sports gym integrated within a impressive network of multi-use trails.

Learn more about Apple Campus 2 here on ArchDaily. More never-before-seen renderings can be viewed on Wired.