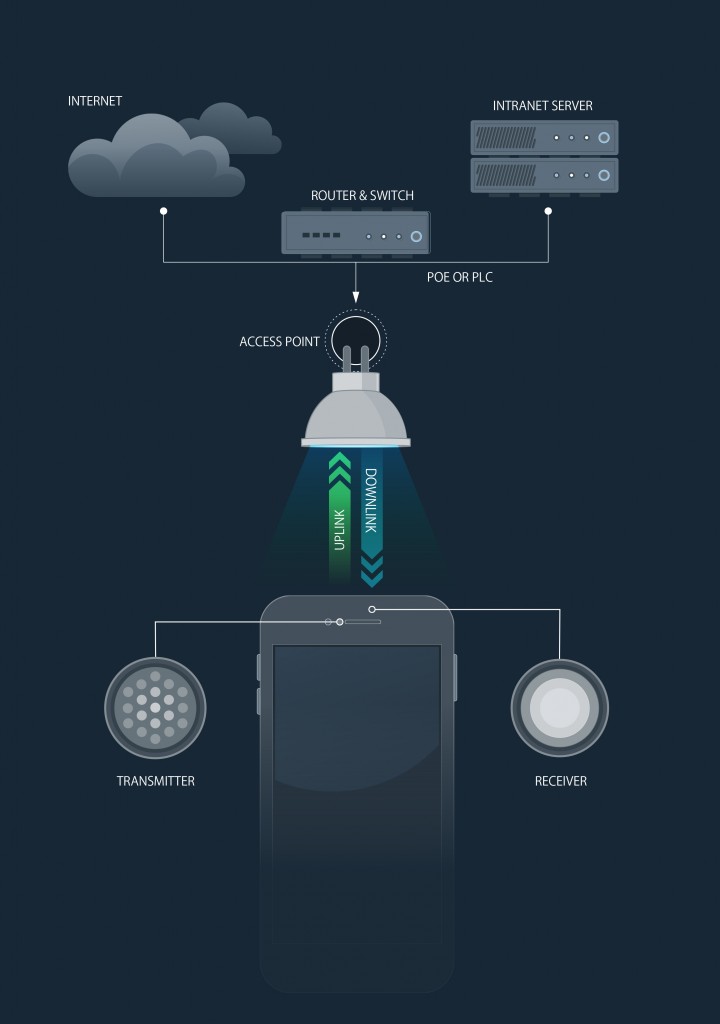 DATA AT THE SPEED OF LiFi

With the technology, data speeds have been clocked at 43 Megabits-per-second (Mbps) up and down

Ready for its Moment in the Spotlight

The promise of LiFi (light fidelity), which utilizes the very LED lights that illuminate a work space to transmit more secure, high speed, wireless data at rates that can go well beyond those possible with Wi-Fi, has now advanced to the point of introducing a new form of mainstream implementation.

This new development results from the introduction of the first LED “light bar” fixtures equipped with the required transmission technology and designed to replace the most ubiquitous form of lighting in commercial and industrial facilities: fluorescent tubes.

With an estimated 3-4 billion installed fluorescent tubes throughout the world, the integration of built-in LiFi transmission technology in new and retrofit LED light bars is now moving LiFi beyond the pilot stage to full-scale implementation in offices, schools, warehouses and other facilities.

“LiFi is not a concept, it is really here,” says Harald Haas, co-founder and Chief Science Officer of pureLiFi, a company that is spearheading the development of the technology.  “If people want to engage, they can purchase the products right now.”

To do this, the LED light fixtures used in many energy-conscious homes and offices are outfitted with a module that controls the light for optical data transmission.  The high speed light pulses are invisible to the naked eye, yet can be used to transmit data at extremely high speeds to a receiving device located in a laptop, computer tower, cell phone or other smart device.

In the future, LiFi will be embedded into the mobile devices we use every day, as well as play a key role in machine-to-machine communication and the Internet of Things (IoT).

The utilization of visible light provides a host of intriguing benefits that far outpace what is currently possible with the radio frequency waves used by Wi-Fi and cellular networks.

When compared to the overloaded full RF spectrum, the light spectrum is 1,000 times larger and is currently unregulated with no licensing fees.

In lab conditions the technology is already capable of 10 Gbps speeds, and with the available bandwidth potential, data transmission speeds up to 100 times faster will be possible in the near future as the technology advances.

According to Haas, who is considered the “father of LiFi” and has been working in the field for the past 15 years, the implementation of the technology into lighting fixtures has necessitated a close partnership with LED light manufacturers

“The lighting manufacturers are very important to move LiFi forward,” says Haas.  “They know how to design lights and fixtures and we know what needs to be done to create high speed data networks out of light and add communication capability to it.”

Until recently, most of these fixtures were small lamps or recessed can lights.  Now, one of its partners, Linmore LED, is introducing the first LiFi enabled LED light bars designed to replace fluorescent tube lighting.  For those that want to experience the technology in action, the company is demonstrating a complete, functional LiFi system using the new linear LED light bars at its facility in Fresno, Calif.

With the technology, data speeds have been clocked at 43 Megabits-per-second (Mbps) up and down.

“Linmore LED is the first company in the world to bring this technology not only into new light bar fixtures, but also be able to retrofit linear fluorescent fixtures that employ the LiFi technology,” says Haas.

Linmore LED originally built its reputation in the retrofit market, utilizes its own proprietary designs involving optics, thermal dissipation and a number of other techniques to ensure its LED products perform in the top 1% in energy efficient in the industry.

According to Paul Chamberlain, CEO of Linmore LED, the partnership with pureLiFi was a good fit due to the modular nature of the company’s LED light bars.  The product’s design allowed for the integration of the LiFi modules in the ideal position on the light bar, without affecting critical aspects such as lighting distribution, thermal dissipation or overall performance.

Retrofit fixtures, even those that are not LiFi enabled, are in great demand as many facilities seek to drive down energy costs by as much as 70-80% by converting to LED technology.  This trend is also being driven by the increased operating life of LEDs and concerns about the toxic mercury utilized within fluorescent lamps that complicates disposal

This provides a very real scenario where building owners and facility managers can adopt LiFi technology while dramatically decreasing lighting-related energy costs at the same time.

“Businesses want to leverage an LED upgrade and get more than just lighting, says Paul Chamberlain, CEO of Linmore LED.  “Utilizing an existing part of a building’s infrastructure – lighting – opens up endless possibilities for many other technologies to have a deployment backbone.  Internet of Things (IoT), RFID, product and people movement systems, facility maintenance, and a host of other technologies are taken to the next level with LiFi available throughout a facility.”

Among the expected early adopters of the technology are those that seek greater security of data transmission than is possible with Wi-Fi.  For this reason, initial markets expected to adopt LiFi technology include federal government and defense, banking, financial institutions and hospitals.

LiFi is a far more secure form of data transmission than Wi-Fi because a receiving device must be directly within the cone of light to receive a broadcasted signal.  Visible light, including near-infrared wavelengths, cannot penetrate opaque objects such as walls, which means that the wireless signal is constrained to within a strictly defined area of illumination.

Wi-Fi, on the other hand, utilizes radio waves that are widely broadcast even outside a building where it can be easily intercepted for malicious purposes.

In a man-in-the-middle attack the attacker must be able to intercept all relevant messages passing between the two victims and inject new ones. This is straightforward in many circumstances; for example, an attacker within reception range of an unencrypted wireless access point (Wi-Fi) can insert himself as a man-in-the-middle.

Because visible light is easily containable within a space, it could eliminate classic man-in-the-middle attacks where eavesdroppers located outside an area are able to intercept communications from radio waves emanating outside building.

In addition, traditional encryption and authentication protocols used for Wi-Fi provide an additional layer of security for the LiFi network.

The ability to direct or shape light into defined areas of illumination allows precise partitioning of any environment.

File access is permitted only if a device is connected to the LiFi network. Once a user connects to the LiFi network, they can download and modify certain files.  It is also impossible for a nearby employee to intercept information sent to the server/network by another employee, since the uplink communication is on a different frequency from the downlink.

Further increasing security, every device that can connect to the network can be localized and tracked using the technology.  The same LiFi module enables “communication on the move” by tracking the transmission source electronically, with no moving parts.

“You can walk through a building, into different [light] zones and it will keep you connected the entire time as you move along in the building,” says Haas.

Now that one of the final barriers to full-scale implementation has been overcome with the introduction of LiFi enabled LED light bars, the technology is expected to continue to advance under an “aggressive strategy of miniaturization and lower costs,” says Haas.

Although current technology requires use of a dongle, much like early Wi-Fi, Haas says the major mobile device manufacturers are already expecting to adopt the technology within the next 3-5 years. 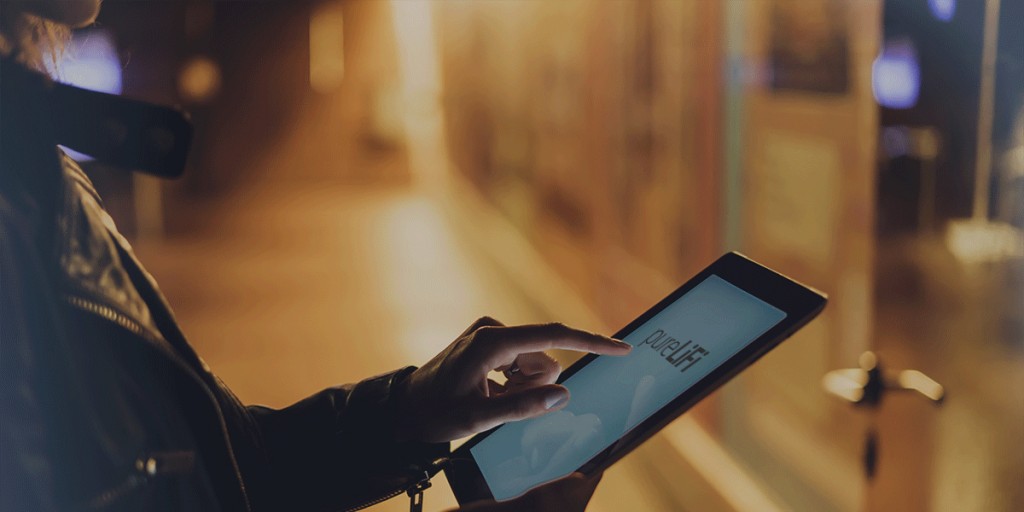 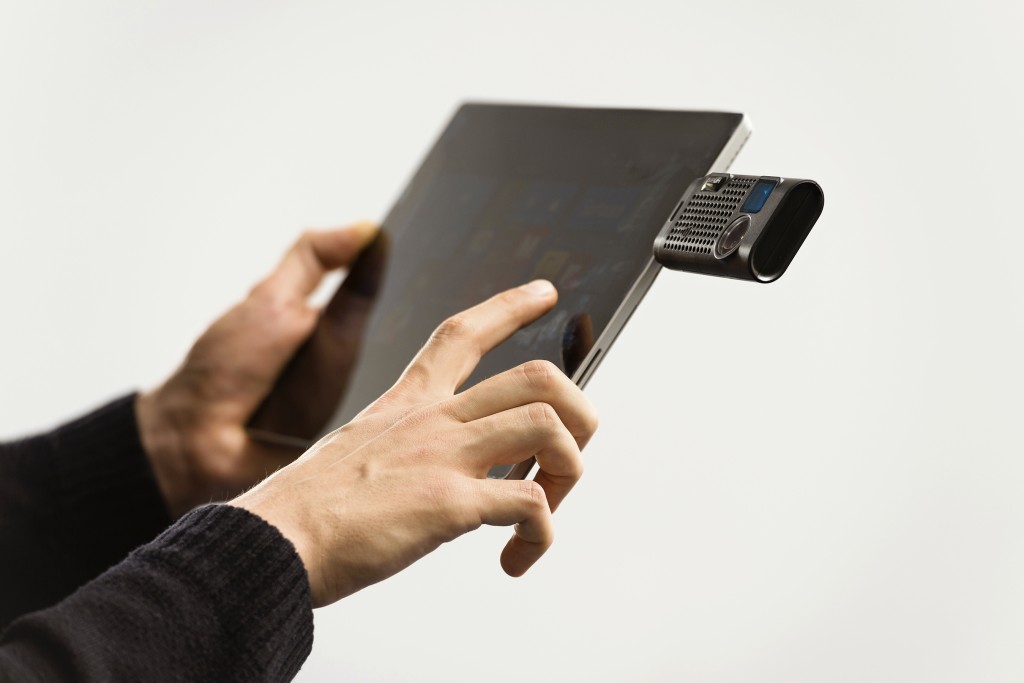 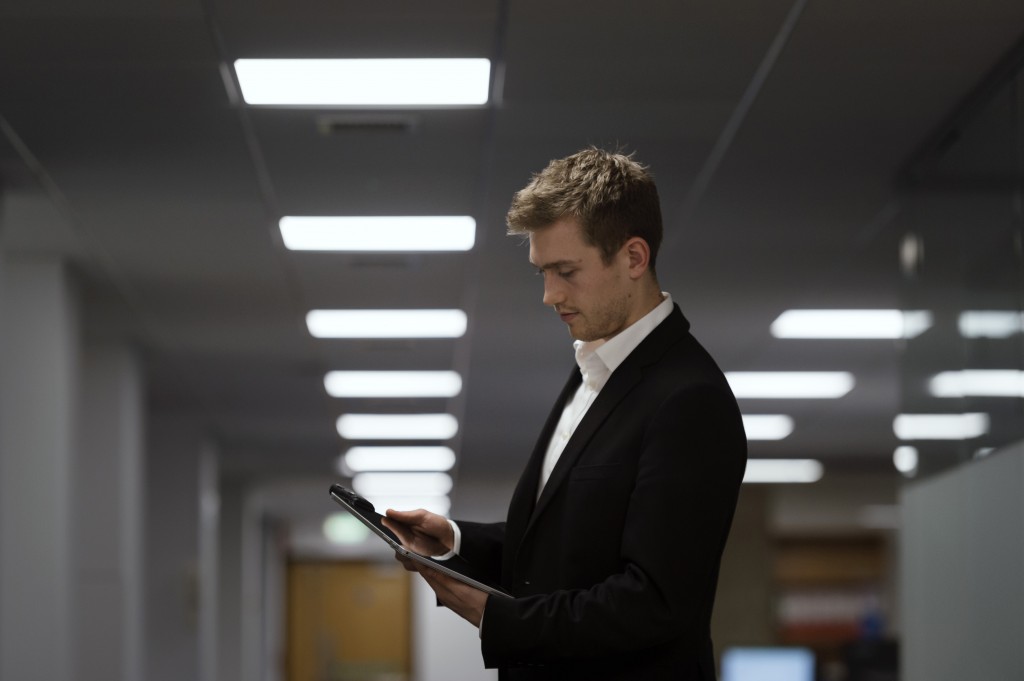